Setting up a Reagent Clojurescript project with Shadow-Cljs and Cursive

Setting up a clojurescript project with    shadow-cljs and cursive

The first thing you should do is make sure you have gone through the official clojurescript tutorial. This explains how to use the clojurescript compiler to convert clojurescript to javascript, as well as get a REPL running that you can use to interact with your running program in the browser, or on NodeJS.

Other than the REPL part, this is actually pretty similar to the current JS workflow for most developers, where they use Babel to convert from ES6/JSX (i.e. a more convenient language to program in) into standard js that would be annoying to write by hand, but will run in all browsers, or on Node.

Shadow-cljs is a tool that will do the same thing you just did in the official tutorial, but with hot reloading of code into the browser. This means that when you make changes to the code, it will automatically be compiled to clojurescript, and reloaded into the browser so you can see changes in the browser almost immediately. Figwheel is another tool that does this.

I'm not really qualified to determine the differences between Shadow-cljs and Figwheel, but my heuristic (= "rule of thumb") when choosing technologies is

Use what most people use, unless you can articulate (and understand!) exactly why you should use something different

There are actually two versions of figwheel, lein-figwheel and figwheel-main. Figwheel-main is the newer re-write, and doesn't use leiningen. But it turns out that running a cursive clojure repl with figwheel doesn't work at this time without using leiningen, something I'm trying to avoid at this time (I only want to use one build tool, not two!) What about shadow-cljs?

[EDIT: Thomas Heller, the author of shadow-cljs kindly took at look at this post and suggested some improvements.

The first is that the first few steps below can be done more quickly by following the shadow-cljs quick start instructions. So you should definitely go read that. I'm going to leave this part of the post unchanged, just to make clear what exactly is happening at each step, in exhaustive detail! So if you just want to get up and running quickly, just follow the quick start instructions]

This installs a copy of shadow-cljs into the project directory, into the automatically generated node_modules directory. You'll see that our package.json file is now as shown:

and a package-lock.json file has been automatically created - don't edit this manually, npm will change this automatically to reflect changes in the dependencies of your project.

Our index.html file is super basic to start with:

I plan on using Reagent, a wrapper around React so we can write our code in clojurescript instead of javascript. Then we will compile our clojurescript code into javascript code, and place it in the public/scripts/ folder, with a name of main.js. So we need a way for the contents of main.js to get loaded into the browser, we do that with a script tag as follows:

Note that the address of main.js in the script tag is relative to the browser file, index.html

We also need to add a <div> with an id, that we can use to tell react / reagent where to render the react code. So we end up with this:

Step Four - Make a directory for our clojurescript files

We could just make a src directory with a core.cljs file in it, but then we might run into problems later.. As explained in the shadow-cljs manual,

It is therefore recommended to be very disciplined about the names you choose and properly namespacing everything. It may seem repetitive to always use (ns your-company.components.foo) over (ns components.foo) but it will save you from lot of headaches later on.

So in our case, our directory structure will be

And the start of our core.cljs file will be

corresponding to our directory structure

So now our full directory structure should look like this:

Step Five - Tell shadow-cljs what to do

We do this by making a shadow-cljs.edn file at the root of our project, which will contain a map with our configuration. You can generate a template by using npx shadow-cljs init which gives us:

We need to fill out values for each of the three keys, :source-paths, :asset-path, :dependencies  and :builds.

Our source clojurescript files are in the src folder, and right now, we don't want to set up separate dev and test source paths. so we change the value for the :source-paths key to

The :dependencies key is fairly self-explanatory (just note that the value for :dependencies is a vector, and each dependency is another vector within it.)

Finally, we want to have one build, which we name :app. The corresponding value for the key :app is a map

The :target :browser is not strictly required, as shadow-cljs defaults to a browser target if the :targetkey and value are absent.

The :output-dir is the directory where shadow-cljs will put the newly generated javascript files, which it creates by translating our clojurescript in the src directory. So we set this to public/scripts/ in our case.

There are two keys we are going to include which are optional, but which are nevertheless extremely useful: :dev-http and :nrepl

If we add :dev-http {8081 "public"} to shadow-cljs.edn, then shadow-cljs will start an http server on localhost:8081, serving files from the "public" folder when we later call npx shadow-cljs watch :app. And if we define a specific port for the nrepl (network repl) to run on, using :nrepl {:port 55555}, it will save us a bit of work each time we start up the repl, in Cursive.

[EDIT: so it turns out, per thheller that we should avoid this - instead, we should have shadow-cljs generate a pom.xml file and use that and Maven to do dependency management in IDEA/Cursive.

First, go the preferences for IDEA plugins, File>Settings>Plugins on Windows/Linux, Intellij_IDEA>Preferences>plugins on macOS. Make sure that Maven is installed

Then type the following command in the terminal:

If you do ls in your project directory, there should be a pom.xml file there.

We now want to Choose "Open / Import" from this screen: 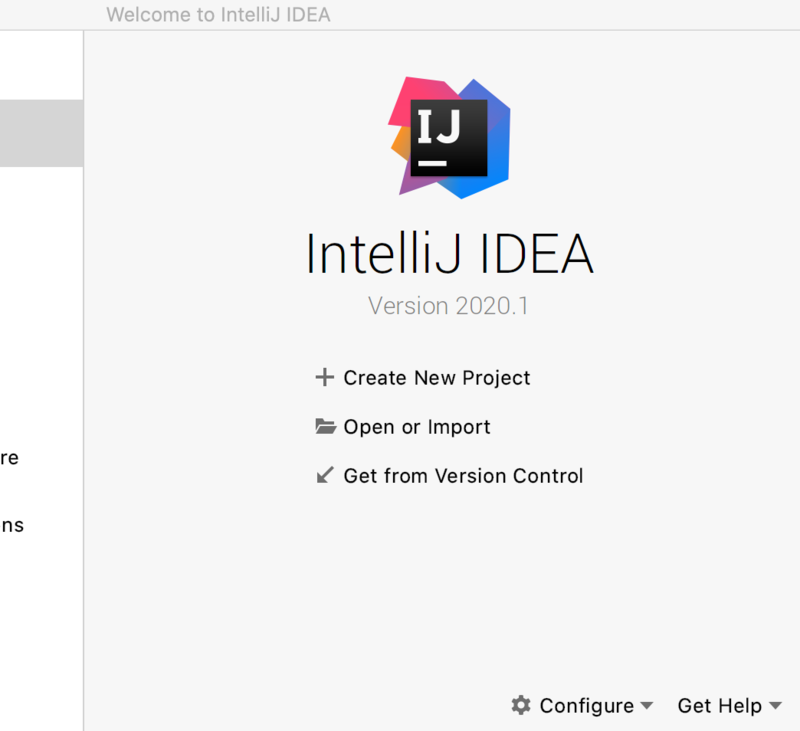 Open a terminal, and type npx shadow-cljs watch :app. This does the following:

Step Eight - Set up a repl

When you typed npx shadow-cljs watch :app, you should have seen something like the following in your terminal:

Click Run > Edit Configurations... You should see the following screen: 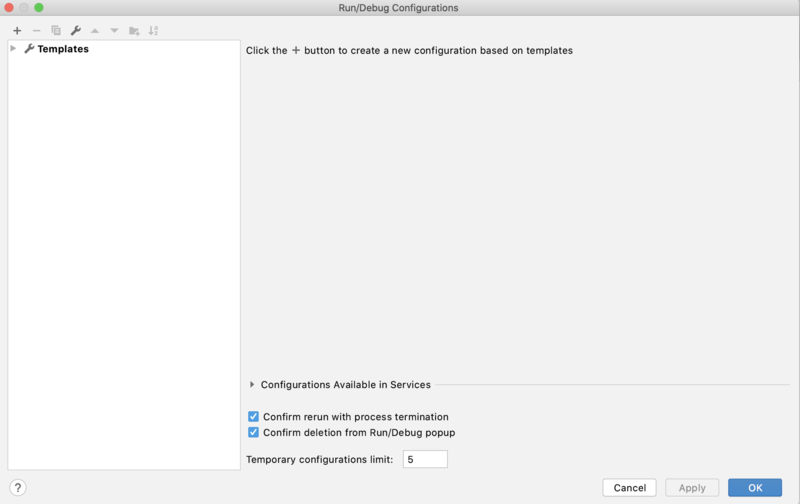 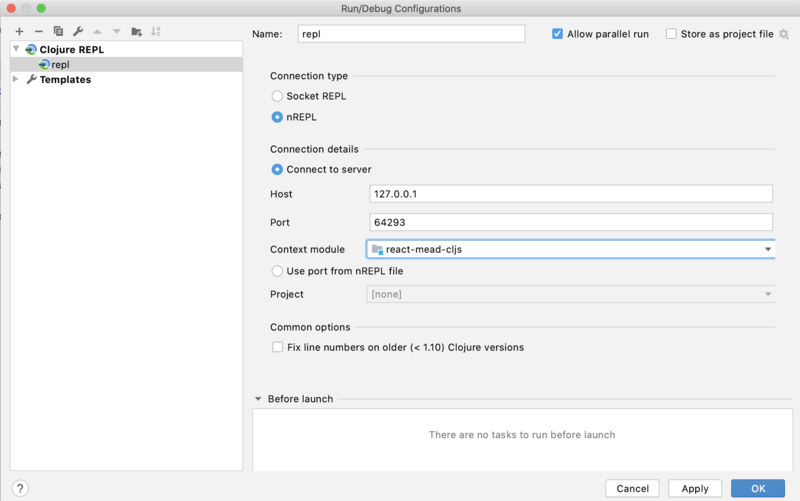 You should now see the word "repl" (or whatever you named your repl) in the top right of the IDEA window, with a small green triangle 'play button' next to it. Click the 'play' button to start a repl client that connects to the nrepl server started earlier by shadow-cljs 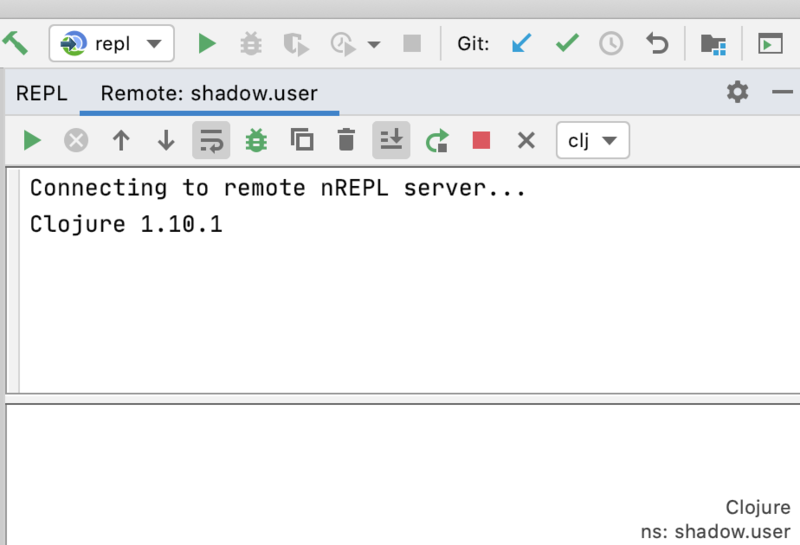 You can then type clojure code in the bottom window and when you have entered a complete clojure command (e.g (+ 1 2)), hit the return key, you should see it evaluated in the top window. However, you'll see that this is in fact a clojure repl, not a clojurescript repl. So we need to enter two more commands in order to get a clojurescript repl that is connected to the browser. In the repl, type the following (the bit on the line after => is what the repl prints out after you enter the command. So you type in (shadow/watch :app) and on the next line, the repl will print => :already-watching)

After typing the second command, you should find that the dropdown menu in the repl window has changed from "clj" (clojure) to "cljs" (clojurescript).

See the Cursive repl documentation for more information, including how to send a single clojurescript expression or an entire file directly from the editor to the running repl we just set up.

The screen will be blank, because we haven't written any reagent code, and the rest of the index.html file is empty. But our repl is connected to this page, which we can test by entering the following into the repl:(js/alert "Hi from shadow-cljs") which creates an alert in the browser window.

If we open the developer tools in the browser to view the js console, we can also use console.log from the repl:

which both return nil in the repl, but whose effects should be visible in the browser window.

Step Ten - Render some reagent / react to the browser

If we go to the Reagent webpage we can see an example of a reagent component. We can copy this component, "simple-component" to our source file  core.cljs

But nothing shows up, why? If you have used React, you'll recall that first we need to create some html using jsx - in our case, instead we use reagent's hiccup-like syntax

But we also need to run the equivalent of ReactDOM.render(), passing it the jsx fragment we created, as well as passing it a reference to the DOM node where we want it to show up. In Reagent, it looks pretty similar - so after importing the relevant libraries, our core.cljs looks like this:

Hmm, still not showing up in the browser. Recall that we in shadow-cljs.edn, we had to set the entrypoint for the program. We want the run function to run, so we change the relevant part of shadow-cljs.edn from

For changes in shadow-cljs.edn, you may need to refresh the page in order for the new configuration to load

At which point we should see: 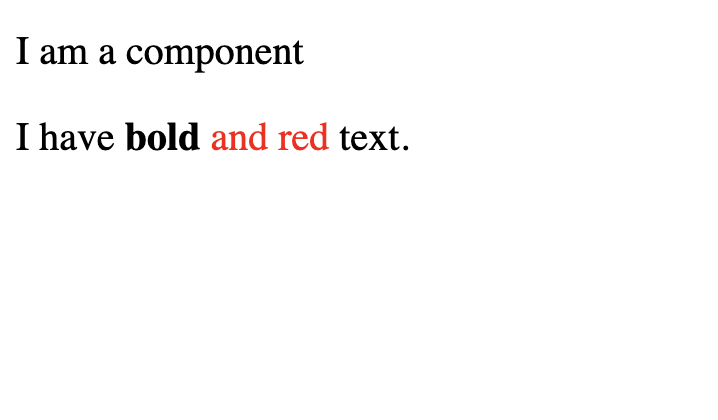 Success! We can now start working our way through the reagent tutorial before moving on to re-frame...

[EDIT: After posting this, I found out that the hot reloading isn't working - oops! Thomas Heller's post is helpful - seen next post for getting hot reloading working!]